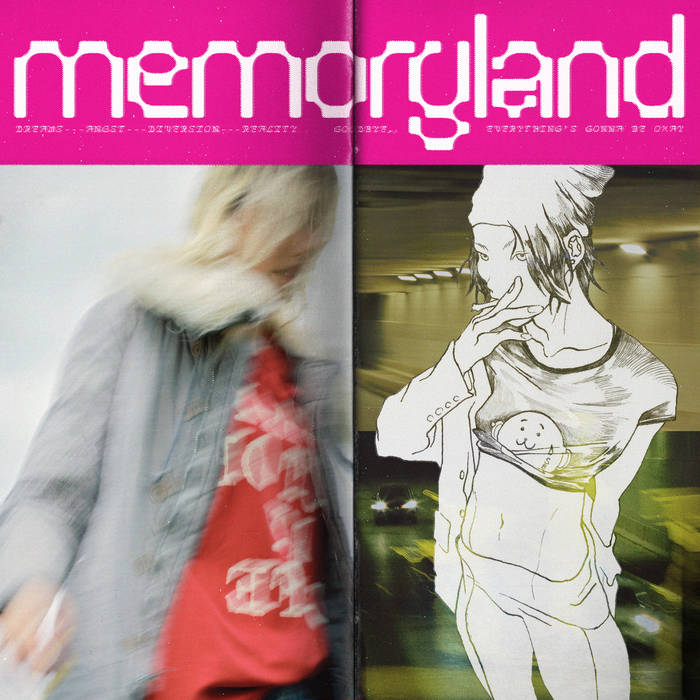 metatron takes me back to my days in high school listening to progressive house, deadmau5, daft punk, james ferraro etc. pristine vibes on this one 8/10 Favorite track: Self Service 1999.

Wyatt raymond feels like a nostalgic tribute to the 90s/y2k nostalgia itself Favorite track: After the After.
more...

Montreal’s eclectic producer CFCF (aka Mike Silver) follows 2019’s effusive corporate jungle opus Liquid Colours with a kaleidoscopic capital-E Electronica album that takes a range of styles from his earliest formative listening years (1997-2000) and throws them in a blender. Elements of jungle, house, UK garage, trance, pop and post-grunge are blended to form a glossy picture of restless youth in an
identity crisis: memoryland.

Inspired as much by Sonic Youth and Smashing Pumpkins as the Chemical Brothers and Basement Jaxx; as much by films like Millennium Mambo, Demonlover, Morvern Callar, Safe and Perfect Blue as late 90’s Prada — CFCF jumps across genres as a means of portraying a breadth of overlapping milieus and identities in this hyperactive Y2K period-piece that both explores and criticizes our own nostalgic impulses. From the opening intro’s announcement of arrival to the final credits, it’s an album as film as RPG, with the listener as its protagonist.

Opener “welcome.WAV” functions as a start-up sound file for the journey ahead: from “Life is Perfecto”, a propulsive breakbeat-dreampop hybrid, to a grotesquely-remixed ultra-French-house version of previously released single “Self Service”, and the recursive, metaphysical garage of “After the After”. Two guest vocalists lend their talents: Montreal neo-shoegaze icons No Joy, fresh off their own genre-defying Y2K exploration Motherhood, laconically lists off advice for aspiring fashion ingenues with bite in the alt-rock-IDM “Model Castings”, while Kero Kero Bonito’s Sarah Bonito sweetly delivers the penultimate “Heaven”, grunge-pop paean to the myth of Icarus.

In CFCF’s words:
“I was feeling fatigued by an overabundance of ‘calming’, productivity-oriented music, and wanted to explore something angsty, messy, and dark, while also applying a pop sheen. I see a loose narrative across the album: your early 20’s, a new city, new people, new temptations and new traps. Losing your sense of self to the whims of your surroundings and trends in music and fashion; the wrong people, and trying to dig yourself out of that hole. There’s a hope of moving forward that glimmers in the last quarter of the album, but it’s out of reach and seems to come at a price. And then the looking back on it later with perspective; or the looking forward to it before with anticipation. As a kid I couldn’t wait to be in my 20’s; in my 30’s it’s bittersweet to look back. That’s the core of memoryland: the gulf between the fantasy, the reality, and the memory, and how we live inside each of those at different points.”