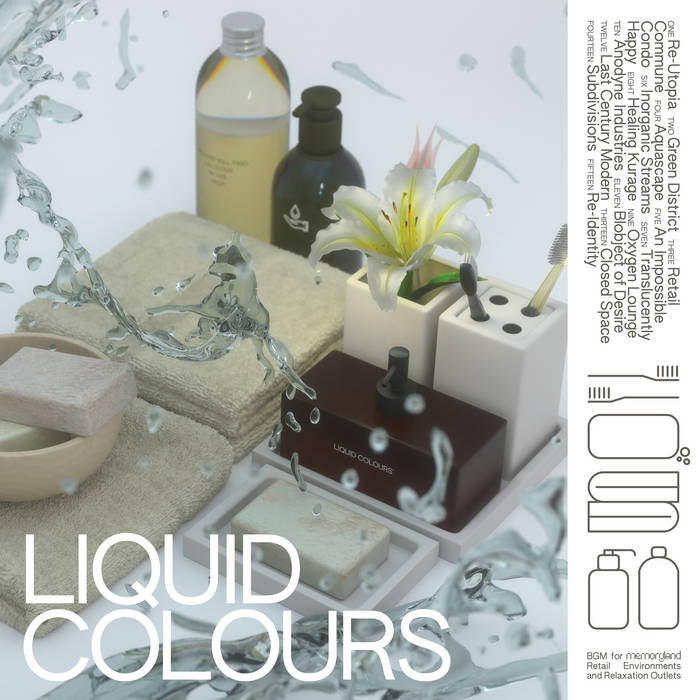 cherub420 Difficult to explain the layers of enjoyment felt when hearing this front-to-back. Immediately calming, ambient yet stirring. So many different portals into dnb, jungle, balearic etc; just when you think you're grounded by 1 sound or rhythm, the atmosphere begins shifting & expanding elsewhere... Favorite track: Translucently Happy.

buppi Transformative. Blurring the lines between nature and modernity. Every time I listen new details present themselves and I emerge once again rejuvenated. Favorite track: Oxygen Lounge.

Montreal’s earnest-kitsch-explorer CFCF (aka Mike Silver) has been honing gentle revisions and updates on the outmoded luxuries of pop and new age music for years now. Now he returns with a ‘spiritual sequel’ to his much-loved 2015 ambient opus ’The Colours of Life’, refitted with an eye towards the bygone future: oxygen lounges, chill- out rooms, luminescent spas, and breakbeats. Told in 15 movements, ‘Liquid Colours’ is a 42-minute new age jungle odyssey, perfect for a journey into a dreamworld of pure consumerism. Like all of CFCF’s work, it’s as sincerely and painstakingly composed as it is gently sardonic. In Silver’s own words:

“Liquid Colours started just like The Colours of Life, as a simple challenge to myself to see if I could follow through on a continuous 40 minute suite in one style. Much like COL, it was a break in working on another more involved, complicated album. I was interested in ‘corporatized’ pop jungle — totally inauthentic to the genre’s roots. The jungle tracks on ‘Ray of Light’, Everything But The Girl, Towa Tei, Bahamadia, each member of YMO has respectively released some solo work exploring the genre. Bill Laswell plowing his fucking bass over a DJ Spooky remix of the Jon Spencer Blues Explosion or something. TV interstitials, ads. At its most oversaturated, jungle and d’n’b was briefly the sound of capitalism. In fact once while I was in the middle of working on the album I had to make a call to some customer service line or other, my bank or something, and the on-hold music sounded exactly like this record I was making! I really knew I was onto something then.

Like The Colours Of Life, I’m being very sincere with the musical approach by focusing on song-craft, but there’s a lot of tongue-in-cheek, slightly satirical thinking in there too. I know I’m doing it wrong, I know it’s stupid, I just think it’s more honest when I do it this way. I’m paying homage and teasing at the same time. One track is kind of a piss-take on Boards of Canada, it’s like ouroboros’d nostalgia loop - the 60’s viewed from the 80’s viewed from the 00’s viewed from 2019. I was also thinking about Roni Size’s New Forms; it won the Mercury Prize, it was viewed as this groundbreaking, futuristic work. It’s a really great record, but it’s fascinating to think now about the status it had compared to now. You can picture some young New Labour minister spinning it on his Discman between policy meetings. Just totally failed optimism.

I love all these things. I get excited to take influence from things in a sincere way while also acknowledging why they are slightly ridiculous. I love the cast-off Spooky/Laswell JSBX remix sitting on a CD-single somewhere (it doesn’t exist). My friends give me weird looks because we’ll be record shopping and I’m blowing $2 on a Fantastic Plastic Machine single. There’s a risk of coming off like an ironic-hipster-trash-peddler, but I have genuine affection for this stuff because it is dripping with undeniable life and sincerity.

I tried to make the record feel like a covetable object. It’s super commercial. If it were a place, it would be a mall designed by Marc Newson and Karim Rashid. It’s MUJI background music. You could buy a bucket hat to this album, but like, a fashion bucket hat.”